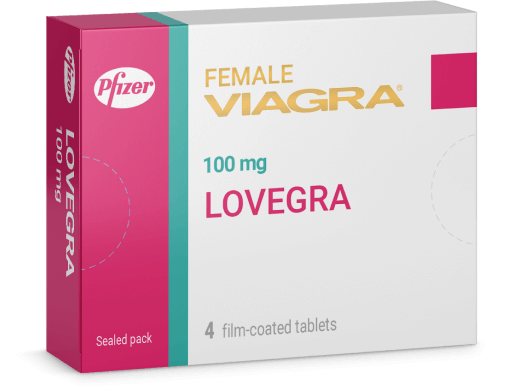 Whilst it’s well noted that erectile dysfunction is the most common sexual problem men have to contend with, it’s often forgotten that women too can face a multitude of problems in the bedroom. Like ED, these can stem from both mental and physical factors such as stress and anxiety, or underlying medical conditions. As time progresses, these cause sex and intimacy to become unappealing and sometimes painful prospects which erode relationships and self-confidence. Although there is no Viagra suitable for women, there remain several other pills designed to target this issue, such as Lovegra.

Can women take Viagra? If not, why?

It is often queried whether women can take Viagra tablets. The official answer is no, they should not, as The United States Food and Drug Administration has not approved it for female use. However, it does have a history of being prescribed in a way that is known as “off-label” for women struggling with their libido.

Despite this, a female user taking Viagra should expect to experience similar effects to those observed in men. For example, in a 2003 study conducted at the University of California Urology department revealed that sildenafil citrate (the active ingredient) did help postmenopausal women who suffered from female sexual arousal disorder by increasing sensation during sexual stimulation.

Does Viagra work on women and is it safe?

Despite the pharmaceutical brand's clear instructions that state these tablets are only for adult men, two questions that still repeatedly get asked are: “Does Viagra work on women?” and “what does it do to women?”.

Answering these are a little more complicated. As explained previously, Viagra itself is not FDA-approved for females. However, the ingredient that makes it effective - sildenafil - has been shown to prompt the same reaction in women, meaning that other tablets containing this may be effective as treatment for women suffering problems relating to sexual satisfaction.

What happens if a woman takes it depends on the personal constitution of the user in question. What may be harmless or even effective for one individual might be highly dangerous for someone who has health complications listed in the medication's contradictions.

Lovegra - a viagra for women

Often described as "viagra for women", Lovegra is the brand name for a medication that is highly beneficial for female sexual desire and pleasure during both coitus and foreplay. It is manufactured by the Indian specialized pharmaceutical company, Ajanta Pharma, who are acclaimed for their success in pioneering treatments for male impotence. They are highly reputable, having received Gold Trophy status for Quality and Excellence from the Indian Drug Manufacturer's Association in 2011, and later included in Forbes India Super 50 companies in 2015.

For anyone curious and wondering “what is Lovegra and how does it work?”, the answer lies in the drug’s active ingredient, sildenafil. This is a renowned vasodilator which, when ingested by men, prompts blood flow to the penis and in turn, induces a firm erection. It works similarly in ladies by targeting the female genitalia in an unequivocal way. In addition to promoting lubrication (something essential for comfortable penetration and digital stimulation), it also increases vaginal sensitivity, making it more receptive to stimulation and potential orgasms. It does not boost libido.

The standard dosage of Lovegra is 100mg, which is presented in a pink-coloured tablet that may be halved for a weaker strength. Once women are familiar with its mechanism of operation, they then tend to ask "how long does it take to kick in?". In this instance, planning is key and dosages should be swallowed approximately 30 - 45 minutes before sexual activity is anticipated to take place.

Female sexual dysfunction is an umbrella term covering a diverse range of sexual problems, with symptoms ranging from discomfort during intercourse, vaginal dryness or difficulty reaching orgasm. Despite its physiological and psychological impact, FSD remains a complex, and sadly under-researched, condition with no one attributing cause.

Is it possible to buy female Viagra in the UK? Where can I get it?

Buying female viagra in the UK is a little more complicated. Unfortunately, for anyone curious where to get or where to buy female viagra, it is not yet available for sale in the UK on an over-the-counter basis. It is instead sold in many foreign online pharmacies - meaning that due to the sheer distance and shipping logistics, next-day delivery is usually unavailable.

The price is variable depending on which website is accessed, but, as it is not authorised for purchase in the United Kingdom, it is important to read any reviews to ascertain the product is legitimate.

We use cookies to enhanced your experience. By continuing to visit this site you agree to our use cookies.